Murray House (CN: 美利樓) is an 160-year-old Victorian-era building that was originally the officers quarters of Murray Barracks in Central. The beautiful building, now a major landmark and icon of Hong Kong, was transplanted in 1982 from its original location in Central to where it resides today in Stanley.

In Stanley, a picturesque waterfront village, it has found a good home and today is fully restored and open to the public housing restaurants.

in Stanley, Hong Kong. Built in the present-day business district of Central in 1844 as officers’ quarters of the Murray Barracks 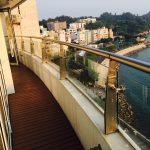 Stanley Oriental Hotel – The four-star hotel offers modern accommodation with rooms that are a larger by Hk standards. Some rooms have ocean views. There is also a hot tub with superb ocean views to enjoy. It is located in easy walking distance from Murray House and Stanley Market.

Murray House was one of the oldest surviving public buildings in Hong Kong. Similar to many of its contemporaries from the early colonial era, it was designed in Classical architecture style. The heavy stone walls (with flat-arched opening) are on the ground floor to give a sense of stability, while the lighter Doric and Ionic columns are on the floors above to allow better ventilation. All floors have verandas on all sides in response to the local subtropical/monsoons climate.

Early history
Murray House was built in 1844 as officers’ quarters of the Murray Barracks during the early years of British rule. It was named after Sir George Murray, the British Master-General of the Ordnance at the time. The designer and constructor were Major Aldrich and Lieutenant Collinson of the Royal Engineers.

Post-war period
After World War II, several government departments used the building as offices, including the Rating and Valuation Department, starting in 1965. The building was believed to be haunted and was exorcised twice. One of the exorcism ceremonies was held in 1963, the other one was held in 1974 and was televised. Since it was a government building, the Government granted permission for the exorcism to be performed.

In 1982, the historical landmark was dismantled to yield to the new Bank of China Tower. Over 3,000 building blocks were labelled and catalogued for future restoration. In 1990, the Housing Department proposed the resurrection of the building in Stanley. The building was restored in 2001 and reopened in 2002. Originally classified as a Grade I building, the rebuilt House was not graded, as it was considered that the relocation project had failed to meet the international standard for heritage preservation.