Jockey Club Creative Arts Centre (JCCAC – CN: 賽馬會創意藝術中心) is home to more than 100 artists and art organisations. It was once an old factory site. There are regular events held here and even public courses. For full details see their website for what’s on. 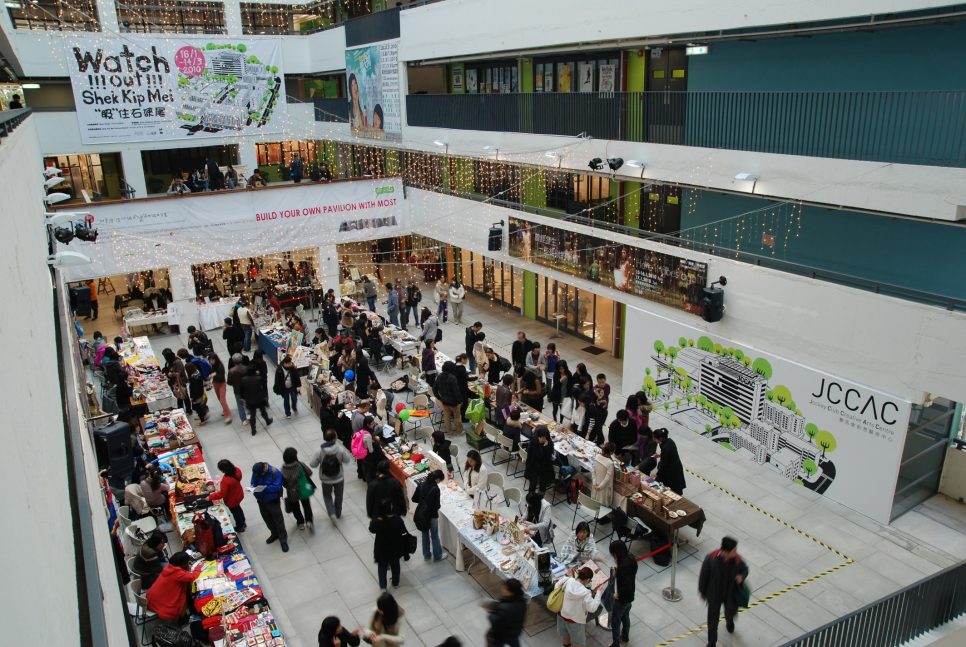 The building housing the JCCAC was formerly known as the Shek Kip Mei Flatted Factory Building or the Shek Kip Mei Factory Estate. The Factory Estate was built in 1977 and comprised one nine-storey block accommodating 390 factory units. It was a facility of housing cottage and local light industries in the late 1970s and was owned by the Hong Kong Housing Authority (HA). It fell into disuse particularly due to a steep decline in the local garment industry in 1990s in Hong Kong when owners started to move their businesses to mainland China. The building was vacant from May 2001.

The JCCAC was the first adaptive reuse attempt in Hong Kong to convert a decommissioned factory building into a creative arts centre. The interior of the centre retains architectural features of factories (architecturally it is reminiscent of London’s Tate Modern). The conversion was awarded ‘Medal of the Year of Hong Kong’ in HKIA Annual Awards 2008 by the Hong Kong Institute of Architects (HKIA).
The design aims to strike a fine balance between new and old features in order to achieve integration with the surrounding neighbourhood and to preserve the inherent characteristics of the old factory building. Local design firm G.O.D. maintains a Street Culture Gallery featuring pop-culture artefacts from Hong Kong’s past for the Jockey Club Creative Arts Centre that is a home to artists and art groups for the production and display of their works.

The Jockey Club Creative Arts Centre provides a total of 131 studio units (each unit measuring 24 square metres) at affordable rent encompassing a wide spectrum of the various tenants’ arts including painting, sculpture, ceramics, photography, glass art, multi-media design, folk art, film and video art, music, dance, multi-media performance, community art and art education. The Centre also has supporting facilities such as a Black Box Theatre, two exhibition galleries, and a central courtyard for organisation of programmes and activities. On the lorry of the building (Level-1), a few rental spaces are reserved for commercial outlets like cafeteria, a commercial art gallery and a Chinese tea house, etc. to provide eating places for the artists.